Recent Art in San Francisco: art against a backdrop of iran’s turmoil

In the midst of concern for the people of Iran/ the demonstrations in Iran from the recent election, I take the time to view art. Against heavy drama I ask– what is art? How does it coexist with life in the moment? Is it a world apart or part of the world? These are questions I am aware of as I jot my art notes in this blog. They are unanswered but the search for these answers will continue.

Over the last week I spent some time at a few of the alternative spaces and galleries in the city. Saturday, June 13, I went over to Root Division, a space along the edge of the Mission for a group exhibit. I became mesmerized Nancy Popp’s Untitled (Street Performance) which is a projected video of someone, the artist herself? On street sign poles, see image.

The selection plays on the wall, scene after scene, some recognizable from San Francisco (one at a Howard Street intersection and more), another Los Angeles that I noted is the Disney Concert Hall (designed by Frank Gehry) corner which lies almost across the street from the LA contemporary.

Contemplating this afterwards – what is this about this particularly sequence that caught my imagination? First, of course, the novel feat of climbing these street poles – wonderful! But then, as the novelty begins to disappear and one accepts it for what it is (if possible) – the recognizable locations begin to form that ‘identity chain’ that occurs with familiar places. Then after that, the other layers, conceptual, begin to slide into place. Street signs – give directions, and the performer is above them. Rather like a Fluxus piece, a creation of the absurd begins to develop into a type of sense in a very cool way.

Yesterday, Satuday June 20, I wondered through some of the spots inside of 49 Geary and 79 Geary. Inside of Haines they have a group show. A smaller work by Amy Ellingson ( http://amyellingson.com/ ) calls out to me as I pass by and i take a quick photo and have placed it here; hoping some of its magic will appear to you. I do not know how the play of layering here happens; is it entirely optical?

Image below is by Amy Ellingson.

I went into the Micaela Gallery to view IN CAMERA: the works by Douglass Freed, Taliaferro Jones and Joshua Hershman. I was curious to see Douglass Freed’s work as I have been familiar with his work from Kansas City. You can acquire a PDF of the exhibition by going to http://micaela.com/. I recommend going in to view the exhibition. There are paintings of Freed’s that have similar sensibilities to the American Luminist painters along with camera sculptures and glass and photos by Jones and Hershman. Remarkable showing and well put together curatorial thought!

Mark Wolfe’s Contemporary has a concrete installation up that I believe is by James Sansing http://www.jamessansing.com/. It is a site specific installation and sets in the gallery’s almost concrete shell with concrete blocks. Some appear to be suspended from the ceiling, others placed precariously on the floor, one like a giant boulder.

Image below is by James Sansing.

Then, my brother and I traveled over to Michael Rosenthal’s new gallery over in the Mission http://www.rosenthalgallery.com/ to view Jillian Mcdonald – Apocalypse Zombie Installation View. We were early, but the event for the evening was beginning. I wish we could have stayed longer. Interesting enough, prior to going there while at the Micaela Gallery, we (my brother, Micaela? and myself) had a brief discussion on vampires in contemporary culture and the fascination with these kinds of elements being part of today’s world as one of Douglass Freed’s paintings (the one pictured in this blog above ‘Immerse’ is included in an upcoming (vampire) film – I think from a trilogy that began with Wolverine ) So this being the case, the videos, shifting faceted portraits on the wall panels, and the event that was to occur, line up implicitly!

Image below is a view of Jillian Mcdonald’s- Apocalypse Zombie Installation from MR website. 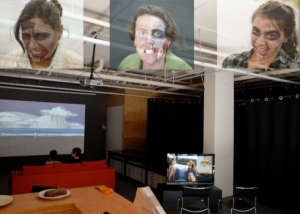 Prior to my adventures in the galleries, I had been over to the Ansel Adams/ Georgia O’Keefe exhibition at the SF MOMA. Many of the well-known works by both artists are there and I want to go back to do some further study. I have interest in Adams for his photography and relationship to the Early Modernists in the States but also because i love to hike. There are a number of images from the Sierras and of course, Yosemite, and I find myself wanting to be in that same spot, catching the light. One of the people I rode up the elevator with mentioned the audio tour for this exhibtion is outstanding so I will try it on my next trip there.

This week YBCA to view the Objectified film by the same director as did Helvetica, By Gary Hustwit.